Bumby has been refusing to sleep lately (as in, lying awake happily cooing and/or nursing while perfecting his double clutch downshift (or something, it’s hard to tell exactly what those frantic arms and legs are doing) until FIVE AM last night).

Also, Meg the dog has recently recovered from a few-week long intestinal issue which I am pretty sure originated with the consumption of four or five poopy diapers.  Note to dog-owning new moms – get a trash can with a lid in your bedroom for those late-night diaper changes or you will live to regret it, although your local emergency vet will be happy to charge you thousands of dollars to hold your dog overnight for observation and re-hydrate the poor thing after those disposable diaper crystals soak up all the liquid in her intestines. This means she is back at work protecting our house from passing neighbors, rabbits in the yard, and children who refuse to play tug with her for hours at a time.

Also also, the kids are on spring break. Boo is currently working on her role in the musical produced by our local children’s theater. The Big One will loudly declare any perceived injustice (“I was calling you from the bathroom! Why did you just pretend like you couldn’t hear me?!” she asks of her sibling who was outside of the house at the time.) And the Child Formerly Known as the Boy Child, now that we have two of these, well. He’s a nine year old boy with two older sisters. He’s bound to be loud also.

All of this has me feeling like the Grinch, constantly yelling about all the Noise Noise Noise Noise! Screaming baby, barking dog, shouting singing children.  All on two and a half hours of sleep. Today, nearing the end of my rope, I plopped the crying Bumby in his swing, and got in the shower. I thought he could suck his fingers or something for the five minutes.* Bumby quieted, and I could not hear any of my other dependent creatures over the water.

A miraculous thing happened. Bumby fell asleep in the swing for the first time ever, and my mother in law took the kids and went somewhere. I have no idea where, and frankly, I don’t care. With no one around to bark at, the dog curled up in her bed and went to sleep. So when I got out of the shower, the house was silent. Well, other than the clicky click of the swing, but that noise I can live with. I put my soaking wet head down on my wife’s pillow (that is what she gets for leaving me and going to work every day) and took a nap.

This seems to be the pattern in my parenting since Bumby’s arrival. Sanity steadily degrades, sleep gets worse and worse, household conspires against me. Then, just when I think I can’t take any more, the stars align and I can pull it together.

The dog is barking again, and the kids woke Bumby and me returning from wherever they were, oh-blah-dee oh-blah-dah. At least I had my 20 minutes of silence and a nap to get me through the day.

*Bumby had recently discovered his hands. He cutely inspects them regularly to make sure they are still attached and functioning as desired. He also slurpy-slobbery sucks on them whenever he is able to get them in his mouth on purpose. It’s adorable, if a little bit loud and wet in the middle of the night. 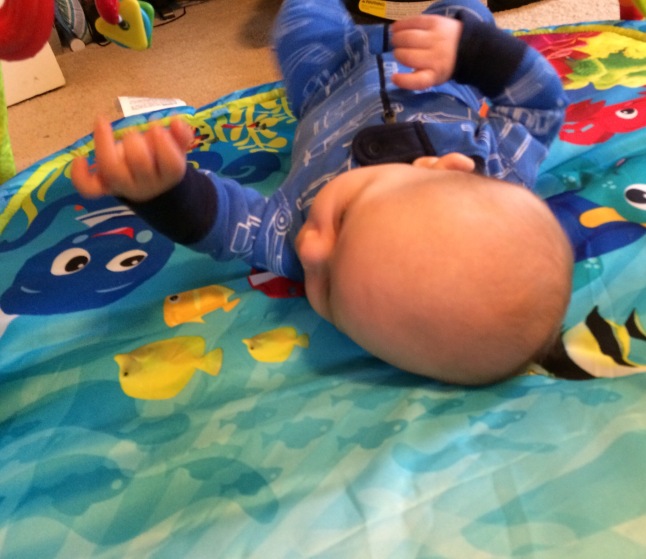 Who needs these fancy toys when there is a perfectly fascinating hand to inspect? Also note the blur of his clutch-foot practicing for his racing days ahead.

I have started and failed to finish tons of posts between this one and my last, but that’s what life is like. I have started to adjust much better to the postpartum life. The shock of not being pregnant has worn off a little, and the hormones have calmed themselves. That’s why I’m so glad I wrote about what the immediate postpartum stage felt like as it was happening. It occurs in that hazy period right after the birth, and it’s too easy to forget those relatively fleeting feelings. But they are real.

Baby J has a nickname around here. After he was born, a lot of people asked us what we would call him. I found this question bewildering. I always answered, “Um, his name?” That’s why we named him what we did. So that we could call him that. Regardless, our kids have had various nicknames over the years. The Big One started out being called Bubbaloupitous, then a shortened version of her name, before settling into her real, full name, which is incredibly appropriate for her. We do also actually call her Big One as well.

The middle kid was, and still is, called Boo. I don’t know why. She was just called that, and it stuck. Real people, like teachers and friends, call her by her name. But at home, she’s Boo.

The next kid is, embarrassingly, called Fatty. He was such a fat baby, with such delicious little rolls, that we called him either Fatty or Fat Thing as a term of endearment. He is now nine, and not fat at all. And yet, if you hang around our house long enough, you will hear one parent or the other yell, “Fatty! It’s time to set the table. Go get your sisters.” He says he doesn’t mind, but could we please not call him that at school. This seems like a reasonable compromise.

The baby, now, is called Bumby. I have no idea why. I just called him that one day, and my wife picked him up and said, “I’m Bumby, dammit.”  Apparently this comes from an Eddie Murphy SNL skit, where Eddie Murphy plays Gumby, although the skit is weirdly absent from YouTube. I cracked up when she said it, and the name stuck. So now he’s Bumby. I am betting this won’t hang around past babyhood, but still. It’s cute. It’s also apparently what Ernest Hemmingway called his first son. So it’s cute and literary.

If I had been writing this on Friday, I would have said that we hit a huge sleeping breakthrough right at six weeks. After weeks of waking to eat every 2-3 hours, Bumby slept for 4 hours and 45 minutes in a row. I felt like a new woman. He then did it again the next night, so I really thought we were onto something. No. He’s done with that. Last night he was up eating every two hours again. Since it takes him 30-45 minutes to eat, we are looking at 90 minutes of consecutive sleep, at MOST. So that sucked. He’s also gotten harder to settle at night. During the day he eats and sleeps easily and well, and even let’s me set him down to nap sometimes. At night, he is wild, thrashing around, arching his back, refusing to calm down and nurse like a normal human but wailing if he is doing anything other than nursing, and instantly waking unless he is physically on top of me. He wants to nurse for comfort, I think, but in reality his belly is a little overfull, so it’s not all that comfortable. He finds a pacifier to be some kind of hoax (where is the milk?!?!) and rejects it vehemently.

Often times, when I am up for middle of the night nursing sessions, I am kept up after Bumby falls back to sleep wondering what to do with myself once my maternity leave is over. I have nearly 6 months of paid and unpaid leave, which I realize is a huge luxury in the US. I want to sob at the thought of leaving Bumby and going back to work all day. I also hate the thought of giving up my legal career just when things are getting interesting. My job isn’t particularly conducive to part time work (meaning I would be staffed on only boring projects, because all the interesting work is also a really intense  time commitment), and anyway we have an awkward childcare situation because my mother in law watches the big kids after school, but has said that taking the baby on a full time basis is too much for her. I’m sure we can work the childcare thing out, but it will be annoying and complicated and isn’t something I want to deal with just to then find that going back to work is actually terrible and I want to stay home anyway. And of course, money. I have told myself I won’t worry about this until 4 months have gone by, but our fears and worries have a way of finding us in the small hours of the morning, even if we have told them they are unwelcome for another 2 months at least.

And finally, I think about how many women have to go back to work now, after just six weeks. Holy shit. That seems like a really bad plan for all parties.

And now, keeping up with tradition, a baby bump selfie. Only now my bump has a head and feet. 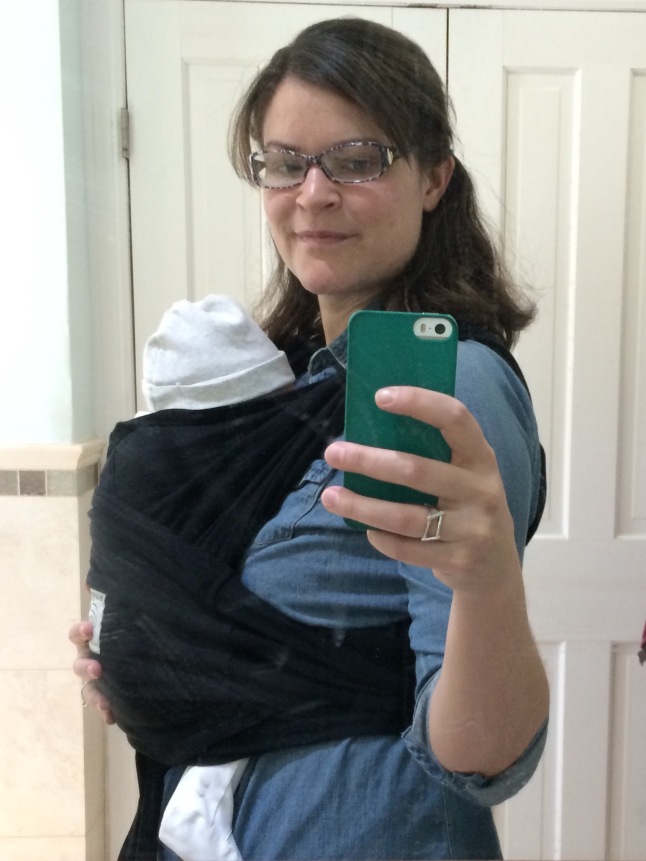