Two nights ago, I had the worst night with Bumby that I have had since he was born. Worse than the growth spurts, worse than when he was a newborn. He was up about every 45 minutes and literally would not sleep without my boob in his mouth. Blame it on his cold, blame it on his approaching the four-month mark, blame it on whatever you want, but by the time he was awake for the day at 5:30 am, I wanted to die. I fed him until 6, then I looked at my wife, who was about to get up for work, and said, “Please just take him. Take him away from me.”  She put him in the stroller because she needed to walk the dog anyway, and he slept 2 1/2 hours straight.  Of course.

I became convinced that proximity to me was causing him to nurse WAY more frequently than he actually needed to.  He also hasn’t been napping for shit.  He used to be a pretty great napper — I could nurse him to sleep, ooze away, and sometimes he would sleep on the bed for two hours like that.  No more. I haven’t had more than a 30 minute nap in ages.  His total sleep is declining, which makes him over tired, which makes him sleep even worse. Something had to give.

Enter Operation Bumbysleep.  Step One is to get him to fall asleep somehow other than nursing or time in the carrier, and stay that way for some period of time. Even if it’s short. We need to create some sleep associations that do not involve parts of my body.  I have had some success with the swaddle, but I thought he was a little too big for it.  You know, because he’s the size of the average 7-month old. But it seems like he wakes up because his arms float all over the place while he sleeps, and eventually whack him in the face or cause him to startle, so yesterday afternoon, when he seemed tired, I gave him a diaper change, jammed him into the swaddle but left one arm out so he could get his thumb if he wanted it.  I gave him a pacifier, and I placed him sleepy but awake under his mobile, which he likes.

Operation Bumbysleep fail.  He watched the mobile for a while, then got bored and started whimpering.  I sat outside his door to see if the fuss would turn into a cry.  It did.  My wife and I are both adamantly against letting him cry it out, even for a little while, so I went in and tried to comfort him without picking him up. This seemed to piss him off even more.  Sleepy but awake. HA. 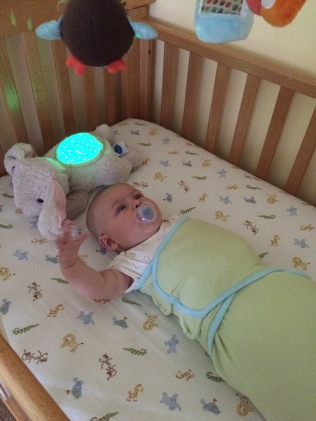 I tried a new approach. I re-swaddled him with both arms in and popped a pacifier in his mouth. I closed the blinds and sang a ridiculous and repetitive song.  It goes like this:

Over. And over. And over.  His eyelids drooped, and his body became a dead weight.  He spit out the pacifer.  I put him into the crib and walked away. Total time: 15 minutes.  Operation Bumbysleep success. 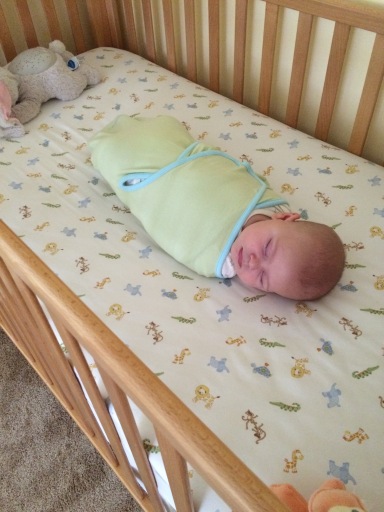 He slept like that for an hour, when he woke up hungry. He seemed sort of pissed off to be awake, and he fell asleep twice while nursing. I didn’t want him to have a nursing sleep association though, this was kind of the whole point.  So I woke him by changing his diaper, which needed to be done anyway, and started again with the swaddle and ridiculous song. The first time or two that I tried to put him down, he woek up sort of mad, but he eventually did stay down. It took almost 30 minutes, but he slept another hour.

In the evening, I let him nap in the carrier, because I needed to walk the dog and I could NOT sing that stupid song anymore. He got about a 20 minute catnap.  At bedtime, we started our normal routine — diaper change, walk with dog in stroller. Normally we come in and I nurse him to sleep at this point, but our plan was to nurse and keep him awake, then do the swaddle-singing business to get him down.  While we walked, we debated what to do when he woke to eat. Bring him back into bed with us, so the transition to his crib is gradual (and mama gets more sleep – I can usually doze while I feed him in our bed)?  Nurse then sing/rock him back to sleep?

He fell asleep in his stroller on the walk.  This has never happened before — it must have been from all his great napping. We figured we would get 20 minutes of sleep before he was awake and wanting to nurse, so when we got home I put the infant seat in his room and shut the door.  We climbed into bed without him for the first time since he was born.  After a while, my wife whispered to me in the dark, “Be careful what you wish for.  I miss Bumby!”  I missed him too.  He slept until somewhere after 11:30 this way, and when he woke, I brought him in with us. He seemed very happy about this.  He nursed at that time, then again at 2:30 and at 4:45.  This seems like a lot, but it was such a vast improvement! Most importantly, he fell asleep and I could move him away from me a little, so I could actually sleep while he slept.

He was such a happy baby when he woke up today!  He was up for the day about 8 1/2 hours after falling asleep.  Once, at around 5:30, he woke, but  he went back to sleep without nursing.  I think he legitimately needs less sleep than some other babies his age, because I tried to put him down after being awake for 2 1/2 hours, and he was not having it. He dozed for 15 minutes and was back up.  I wore him out by letting him play with toys, have a bath, do some tummy time, and get dressed, then tried our swaddle/singing routine.  He was asleep before I could close all 4 sets of blinds in his room.

I think we will carry on this way for a while before we start trying to rock him down in the middle of the night or cut nighttime feedings. Ideally I would like him in our room at night anyway, at least until 6 months, and our little butterball is already too big and heavy for his bassinet. Which, for the record, he never slept in.