Not being pregnant for the sixth month in a row has caused me to take a hard look at the things I have been and have not been willing to do in order to get pregnant. I do believe that a person should be able to live a more-or-less healthy lifestyle and continue on as normal, and become pregnant. But I think most people (or maybe I just mean me?) are in a little bit of denial about what a more-or-less healthy lifestyle looks like.

I eat vegetables. I eat probably more of them than many of my friends and extended family. I am not “overweight,” no matter who you ask (unless you ask that asshole who lives in my head and occasionally surfaces when I am jeans shopping or going to the beach with people who have never seen me in a swimsuit). So I was all yeah, I eat basically well. No changes needed. I plowed through the eating chapter in Fully Fertile making one small change – giving up pop – and carried on as I had been.  Also while ignoring the rest of the book, because it told me I had to get more sleep, so I was like, well, here’s where I give up.

When I wasn’t pregnant last month, I revisited my eating and faced the fact that even though I ate sorta fine, there was definitely room for improvement.  I read the “pregnancy diet” in WTEWYE, and started thinking about nutrients. And, um, I am actually a little short, it seems. I don’t get nearly enough vitamin C or iron, or even calcium. I seem to have become some kind of crazy meat-eater, which is weird because I was a vegetarian for nearly a decade. I probably eat too much salt. And I drink alcohol daily. And (ahem) maybe a bit too much on the weekends.

So for the last few days, I have been diligently trying to get in more fruits and vegetables, and have been drinking milk instead of wine at dinner. I am a LOT more full after dinner now — the milk makes an enormous difference. I am mildly lactose intolerant, so the milk is a bit of a challenge after the fact. The intolerance started when I spent 8 weeks in the UK in college and the cafeteria in my dorm served this horrible super-pasteurized milk that can apparently be left at room temperature. That shit is nasty, and I didn’t drink milk at all for 2 full months, or even put it on my cereal. I came back, and all dairy, even yogurt or cheese, caused issues, and FORGET about putting milk on my cornflakes in the morning. I have gradually worked in all other kinds of dairy and now have no problems with them, so am hoping that my tiny glass of milk each dinner will re-acclimate my digestive system to lactose so that I can eventually grow into the full- sized version of my pre-London years. Even if not, some milk is better for the bones than none, and even though it is animal-derived, at least it is a good non-meat source of protein.

For me, healthier eating was not just a matter of what I added, but also what I subtracted. This meant less processed food, and much less alcohol. Yesterday I was congratulating myself on how little I had been drinking when I realized it had only been four days. Ahem.  But I am carrying on in that regard.

My dinners are almost all home-cooked, thanks to having three growing kids to feed, but I tend to grab both breakfast and lunch out, so this was clearly where I needed to make the effort to eat more home-cooked, nutrient-rich food.  I usually eat some kind of wrap from Dunkin’ Donuts or Subway for breakfast, since they are both in the basement of my office building, and soup, salad, or a sandwich for lunch.  My main challenge with eating breakfast at home was that I never had time to make anything, and I don’t really like cold things or sweet things in the morning. And I don’t really like eggs.  I know, weird. Thus, whatever I was going to eat had to be hot, savory, not too eggy, easy to heat up at work, and had to be made ahead of time.  And so, I present to you, my new breakfast (well, half of it, anyway): 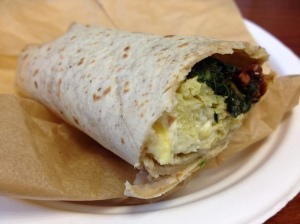 2 Tbsp. Italian dressing
1 lb. frozen chopped spinach
1 tsp. minced garlic
4-5 eggs
5-6 egg whites (I meant to do 4 eggs and 6 whites, but I broke one of my yolks when separating, so I think I was 5 and 5.  Also I kind of lost count.)
splash of skim milk
a handful of sun-dried tomatoes (not the ones in oil!)
1/2 block of pasteurized feta cheese
6 whole wheat tortillas

Heat the Italian dressing over medium heat, and add the garlic.  Thaw the spinach and press out as much excess water as you can.  Add to the garlic when it’s simmering. Cut up the sun-dried tomatoes into strips with kitchen shears and add to the spinach.  Sautee until heated through and the tomatoes soften a bit. Remove from pan and set aside.*

Meanwhile, mix eggs and milk in a bowl until blended but not totally beaten.  Add to the pan the spinach was in, stirring until cooked but a tiny bit runny.**  Spread out 6 tortillas on the counter, each on a paper towel, and divide the spinach and eggs evenly amongst them.  Crumble/chop the feta cheese and divide evenly.  Add some pepper here if you feel like it.  I was lazy and did not.

Wrap each into a burrito, then wrap in the paper towel and then in parchment paper.  Stuff them all into a gallon-sized ziplock and freeze.  This whole process took me about 15 minutes on a Sunday night.  In the morning grab one and stick it in your lunchbox.  I put mine in a sandwich bag in case it thaws, but it’s so freaking cold in New York right now that it never has.

To heat, pop the whole thing in the microwave for 2-3 minutes.  The water from the spinach will soak the paper towel a bit and it will steam inside the parchment paper.  For your trouble, you get:

I purposely made sure this was pregnant-lady friendly, so that I don’t have to think too hard about how to change it if I am pregnant.  I also plan to try some variations on this, with maybe some soy-breakfast sausage, different cheeses, different veggies, etc.  I think bell peppers, sausage, hot sauce, and pepper-jack cheese would be a nice combo to mix it up a bit.

*  Next time, I plan to try mixing the eggs and spinach together. I am thinking it will be less “one bite spinach, one bite egg” and more blended.  We shall see.

** I left the eggs a tiny bit runny because they cook up when you’re re-heating and can get a little spongy.  If you’re worried about food safety, I am sure you can cook them through without it being a huge deal.